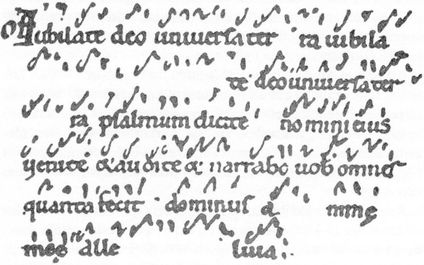 During the Middle Ages (after the fall of Rome, but before the Renaissance) neumes were written over the words of songs.  These small marks were a reminder of how to sing the music.
​
​The problem was that they were only helpful if the musician already knew the song!

​Finally, around 1025, an Italian monk named Guido d'Arezzo had an idea. He invented a four-line staff where the neumes could be written on lines or in spaces to show the pitch.

It worked! Learning music became so much faster and easier, and now music could be written down and shared without needing to teach it note by note!

​Click on the video links below to explore music and instruments from the Middle Ages: